I had to burn some leave time so at the end of June I fled home and hearth and my pandemic routine for a long swing through South Georgia, looking to capture a Roy Burke back roads trip vibration to sooth my soul and slow my velocity. We lost Doc five years ago this month. The timing seemed appropriate. I traveled some 900 miles in three days, from the Kolomoki Indian Mounds outside of Blakely in Early County in the Southwest corner of the state, to the eastern and western approaches to the Okefenokee Swamp. I looped through flat Georgia farmlands and stopped for roadside pecan candies and watermelon and peaches. I beheld the Legendary Folkston Funnel and I paid my respects at Jackie Robinson’s Birthplace, on an obscure vine-tangled ridge-line at the edge of Grady County, near the Florida border. I picked the backroads as best I could, and tried to make time to document the journey with my trusty crappy Android phone camera. I brought along Doc’s old county maps to log, but also updated my navigation techniques using Google Maps and PolarSteps.

Over the course of three days there were a few moments that I was able to commune deeply with his spirit. In particular the beginning of day two, early morning out of Valdosta, fortified by Daylight Donuts, I headed across what I had figured beforehand was the crux of the run, State Route 94. It runs from Valdosta to St. George, across the most remote section of Georgia, briefly becoming Florida State Route 2. As I approached the crossroads village of Statenville in Echols County, I spied a public boat ramp at the Alapaha River crossing. 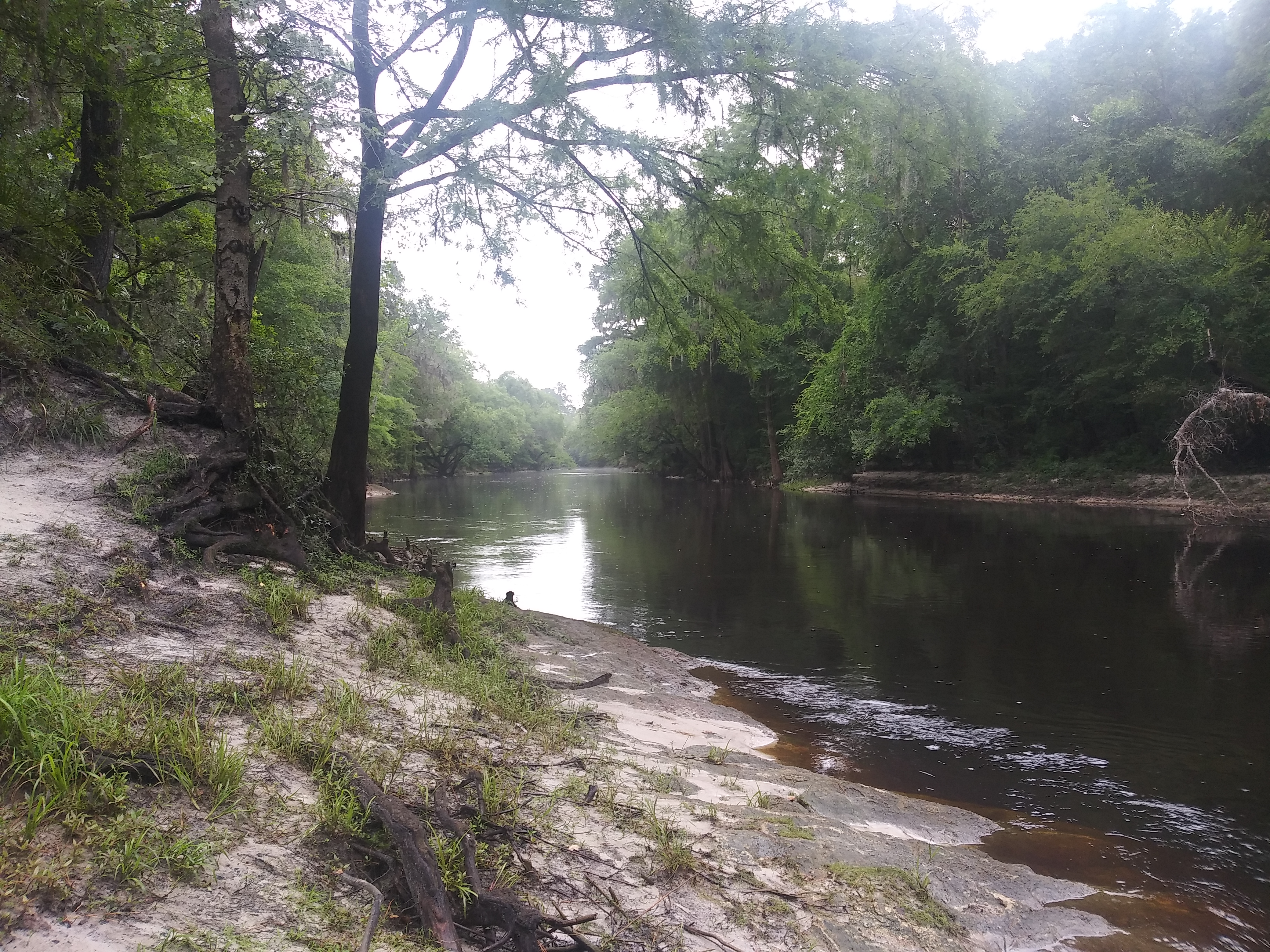 I stopped to take a few photos of the meandering, iced-tea colored water, soaking up an eco-system far removed from the urban generica monoculture I had come to shake off  of my frontal lobe. It wasn’t Doc and his truck this time, just me and Scarlett the Honda. But he was close by, snickering at my pitifully limited camera. The Alapaha runs some 200 miles through South Georgia and Northern Florida, where it eventually flows into the Suwanee, then into the Gulf of Mexico. Doc would have approved of it’s calm dark slide through this mostly unspoiled place. It was my moment of Doctor Flowers satori.

Later that day in Folkston, on the other side of the Okefenokee, I took a picture of a window-door hybrid. 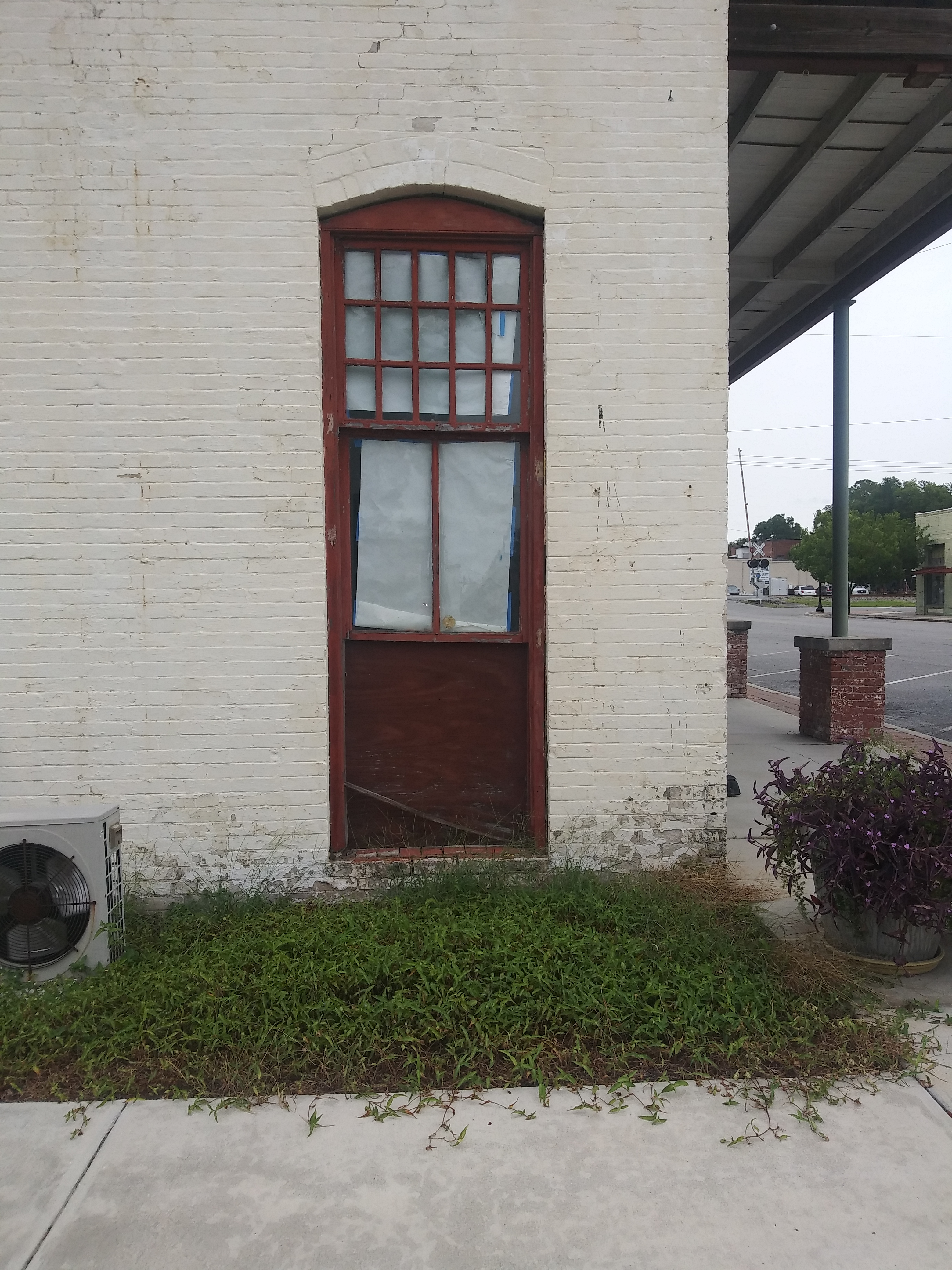 On the morning of day three, taking a county road in Tift County, I came upon the crossroads of Chula, Georgia. I actually had some good light. Doc would’ve enjoyed Jones Peanut Co.

For those of us who shared in his world until June 2015 it’s been a hole in our lives where our cup of smartness and nature and water and science and music and photography and back-road trips and quintessential curmudgeonliness used to be filled to the brim. I have intermittently tried to summon him up through his work here at doctorflowersredux. Harold and I have made several road trips in homage to Doc, tracing his maps with our memories. There have been some moments where we summoned up the right Doc Vibe, but many others where we realized that you can’t ford the same mountain creek twice, that our map skills and memories and time marching on and another new fucking Dollar Store at the country crossroads makes it hard to grasp, those moments with Doc on the road, the truck stopped as he grabbed his trusty camera for a couple of shots and wry commentary. So this was my new way to summon him up, June 2020.

One thought on “June Alapaha Reverie In Memory of Doctor Flowers”